The Board of Trustees of Autism New Jersey elected Genare (Gino) Valiant as its new President at its September 16, 2013 Board Meeting, effective October 1, 2013. Gino, who joined the board in 2008 and most recently served as Vice President, said, “It is a privilege to be elected as Board President of this exceptional organization. I’m incredibly proud of the work Autism New Jersey has done to help families like mine. As we approach our 50th Anniversary, we are filled with more promise and potential than ever. We continue to make great strides in public policy, education and training, awareness and information services, and are poised to do even more to support New Jersey’s autism community.”

The father of four sons, including an 18 year old with autism, Gino and his, wife, Dara, wrote about their experiences with Autism New Jersey in our 2009 Annual Appeal letter. Gino, with his brother and cousin, is a third-generation owner of Valiant Home Remodelers of Carteret New Jersey. For his complete bio, click here.

Gino succeeds James A. Paone, II, whose term ended on September 30, 2013. Jim will be remaining on the Board’s Executive Committee as Immediate Past President. “On behalf of the Staff and Board, I would like to express our deepest appreciation to outgoing President, Jim Paone,” notes Gino. “He is a tireless parent and leader who brought fervent dedication to advancing the mission of Autism New Jersey and will continue to be an active member of our family. His shoes will be difficult to fill.”

The following officers round out the 2013-2014 Executive Committee elected at the September 16 meeting: Vice Presidents: Mary Jane Weiss, Ph.D., BCBA-D and Kathleen Moore; Secretary: S. Paul Prior, Esq., Treasurer: James Grasselino. Autism New Jersey is also pleased to announce the appointment of Sean Nelson as a new board member to a three year term. For a complete list of Board Members, click here.

We are extremely pleased and excited to announce Governor Chris Christie will be a keynote speaker at Autism New Jersey’s 31st Annual Conference on Thursday, October 17 at 11:00am at the Atlantic City Convention Center in Atlantic City, NJ. The Governor has been a true champion and supporter of the autism community, and of Autism New Jersey and the work we do on behalf of families and individuals across the state. We are honored that he has accepted our invitation to address this important Conference.

In June of this year, Governor Christie signed into law the State Fiscal Year 2014 Budget, which included a significant new appropriation of $250,000 to preserve and strengthen the Autism New Jersey Helpline. The Helpline has proven to be a vital gateway for families in need of expert guidance, provider and state resource referrals, and support. Autism New Jersey is working with the Department of Health to advance this unique, public-private partnership.

“The Governor’s commitment to the autism community is evident throughout the Departments of Health, Children and Families, Education, Banking and Insurance, and Human Services. Autism New Jersey’s collaboration with each of these departments to improve the lives of individuals with autism is strengthened because of his leadership,” said Autism New Jersey Executive Director, Dr. Suzanne Buchanan. “The Governor has been integral to helping us fulfill our mission, and his Administration has taken tangible and innovative steps during his tenure. We are excited to host him on October 17th.”

The Governor’s address is open only to those registered for the Conference on Thursday, October 17.

Autism New Jersey was pleased to welcome Vinny Napolitano, Director of Constituencies Office of The Governor, to its Robbinsville, NJ office on Thursday, August 29. Mr. Napolitano had the opportunity to meet with Autism New Jersey’s staff and learn more about the agency’s upcoming events and initiatives. The conversation topics ranged from the Governor’s events such as the Autism Awareness Breakfast at Drumthwacket and multiple Town Hall meetings, to Autism New Jersey’s Annual Conference, plans for its 2014 Ambassador Program, and its efforts to increase insurance reimbursement for medically necessary services. “We value the role Mr. Napolitano plays in facilitating our work with the Governor Office,” said Autism New Jersey Public Policy Coordinator Debbie Charette. “Mr. Napolitano’s commitment to serving the autism community is evident in both his words and actions.”

$250,000 to preserve and strengthen proven resource for families

“The Helpline yields thorough and thoughtful answers to the many perplexing and life-altering questions that otherwise would simply go unanswered. This is a unique and vital resource in New Jersey, and we cannot thank the Governor, our stalwart legislative champions and Commissioner O’Dowd enough for their advocacy on behalf of the autism community,” said Dr. Suzanne Buchanan, Executive Director of Autism New Jersey.

“The Autism New Jersey Helpline has literally transformed tens of thousands of lives for the better. I know because it changed my life, and my son’s,” said James A. Paone, II, Esq., Autism New Jersey’s Board Chairman.

Operational since the 1980s, the Autism New Jersey Helpline (800.4.AUTISM) provides information to more than 30,000 unique website visitors and personally answers 3,500 phone calls and emails each year. Staffed by trained specialists, the Helpline is the place families in New Jersey turn at their most vulnerable moments.  It encompasses more than just a phone number. It is a call center, website, referral lists, and informational publications; services that guide parents through the most important decisions they make for their child at every life stage.

Governor Christie signed the State Fiscal Year 2014 Budget on June 28, 2013. Included in the Department of Health section of the Budget, at the request of Assemblyman Greenwald and Senators Weinberg and Kyrillos and with the support of Health Commissioner Mary O’Dowd, was a new provision that allocated $250,000 from the Autism Medical Research and Treatment Fund to the Autism New Jersey Helpline. Autism New Jersey will be working with the Department of Health to advance this initiative and thus preserve this unique resource for families for the coming year.

Autism New Jersey represents the interests of, and serves as the voice for, thousands of individuals and families from across our state who are affected by Autism Spectrum Disorder (ASD). For several decades, it has been an integral part of a powerful public-private partnership with the State of New Jersey. The programs and initiatives we operate allow those with autism to have access to relevant, evidence-based information and compassionate support when they need it most.  The Helpline is a core part of that mission.

If you wish to thank the Governor and our legislative champions, please click the following links: 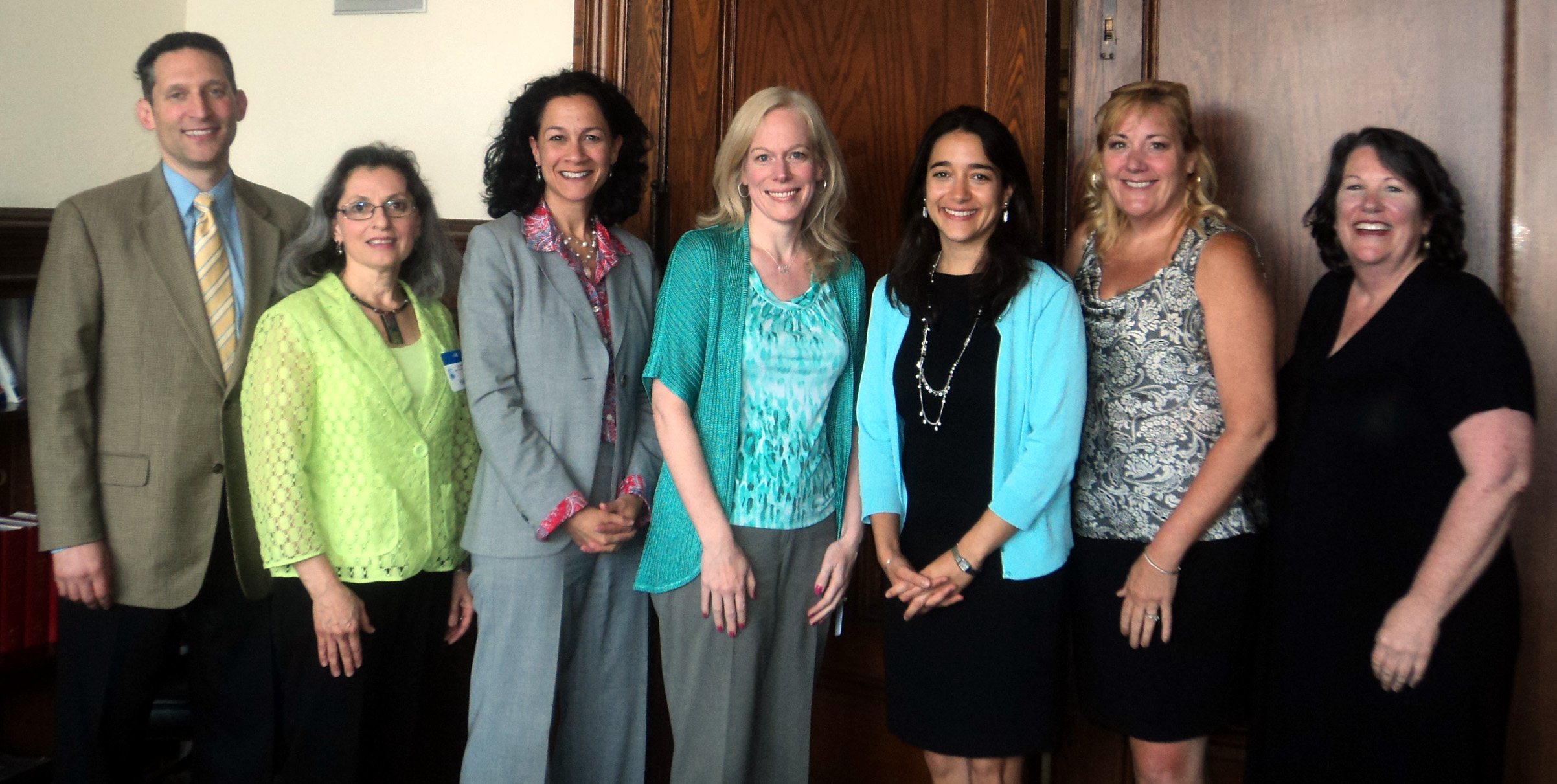 Trenton, NJ — Autism New Jersey had the rare honor of meeting with three New Jersey Department Commissioners on May 31, 2013:   Dr. Allison Blake, Commissioner of Children and Families; Mary O’Dowd, Commissioner of Health; and Jennifer Velez, Commissioner of Human Services.   Throughout their lifespan, New Jersey residents with autism will likely receive services from each of these key departments.  (Click here for more information.)  This forum provided Autism New Jersey with a special opportunity to express the unique needs of the autism community and reinforce our commitment to evidenced-based practices and creating access to quality services.

With the significant system changes and reorganization the State has recently undergone, the opportunity to meet as a group was timely and productive.  It signified a commitment at the highest levels to ensuring the needs of the autism community are heard.

“An open dialogue and collaboration with these state departments is key to our ability to help families and professionals understand the nuances of the service delivery system and access the support needed,“ noted Amy Perrine, Autism New Jersey’s Director of Information Services.     The Commissioners agreed.  “It is important to note that this partnership has been invaluable in the transition. Autism New Jersey has a clear understanding of the work that is necessary to meet the needs of youth on the spectrum. This knowledge has helped the Division of Children’s System of Care (CSOC) conceptualize the work necessary to create a responsive system of care to address the unique concerns of youth on the spectrum ,” noted Commissioner Blake.  (Note:  The CSOC is a Division within the Department of Children and Families.)

“The Commissioners each demonstrated genuine attentiveness and responsiveness to the issues discussed, especially as it related to the unique needs of individuals with autism and the qualifications of those professionals who work with them,” explained Autism New Jersey’s Executive Director, Dr. Suzanne Buchanan.  “Real change requires leadership and commitment.  This was clearly on display at our meeting.”

Among the key issues addressed:

We wish to thank the Governor’s Constituencies Liaison, Vinny Napolitano, for his role in facilitating this meeting.  We will continue to keep our members and stakeholders informed of relevant news and information as a result of our partnership with these State entities.

Autism New Jersey is excited to announce Suzanne Buchanan as its new Executive Director. Dr. Suzanne Buchanan is a licensed psychologist and Board Certified Behavior Analyst – Doctoral (BCBA-D).   She has been a committed staff member and has provided the agency with clinical leadership for more than 10 years.  Suzanne brings a wealth of knowledge and understanding to her new position.

With nearly 20 years of experiences in the autism field, Suzanne has interests in family resilience, informed decision-making about autism intervention, and contributing to the development and implementation of state policies that impact the autism community and the professionals who support them.

“In the summer of 1993, I met a child with autism who changed my life – personally and professionally,” Suzanne reflected. “I was in awe of his and his family’s challenges and their resilience. They gave me my life’s work and passion. Now, as a psychologist, behavior analyst, statewide advocate, and Executive Director of Autism New Jersey, I will continue to do everything I can to empower families and professionals, increase access to evidence-based intervention, and enhance New Jersey’s public and private capacity to support individuals with autism.”

On May 18, 2013, The American Psychiatric Association released the 5th edition of the Diagnostic and Statistical Manual of Mental Disorders (DSM-5).  As previously reported, the new edition will bring significant changes to the way autism is diagnosed. For example, the term, “Autism Spectrum Disorder” will now be used instead of autism, Asperger’s Disorder, and PDDNOS. Diagnosticians are also expected to note the level of support an individual needs as a result of the disability. The DSM changes may temporarily affect insurance billing and impact access to services.  As always, please contact us at 800.4.AUTISM or email [email protected] if you encounter any problems and need assistance.  Read more>>

On January 22, 2013, The Division of Developmental Disabilities’ (DDD) eligibility regulations changed. These changes now require that individuals must become Medicaid eligible as a condition of continuation of DDD funded services. If an individual is receiving services through DDD and has not yet established eligibility through Medicaid, they must immediately do so or risk losing services.

Currently DDD will continue to fund all current on-going family support services through June 30, 2013. Families wishing to continue these services beyond June 30, 2013, must call their DDD contact which is either their DDD Case Manager or the Division of Disability Services (DDS), by this Friday, April 12, 2013. Approvals will be provided by June 21, 2013.  Based on the new DDD Medicaid requirement, all requests for a Family Support service after June 30, 2013, will be approved based on a demonstrated level of need and all Medicaid eligibility requirements being met.

There has been some confusion generated by the letter as families with children under 21 served by the Department of Children and Families through PerformCare believe that this pertains to them as well. It does not. If their child is under 21 and receiving services through the DCF Children’s System of Care, they do not need to be calling DCF or Performcare to continue to receive services. This letter only pertains to individuals over 21 receiving family support services through DDD.